Part Two: How Much Should I Give?

In the last post, we discussed why people give to charities—for many reasons, but most importantly because it’s important to do the right thing and knowing you are doing it is fulfilling. So, congratulations if you’re still here. You’ve decided to make charitable giving part of your life. Once you decide to give, the next question is: how much? That’s what we’ll cover in this part of our giving guide.

Essentially you want to give enough that it’s meaningful, but not so much that you impoverish yourself. But for middle-class and wealthy people, that is a wide range! How do you narrow it down?

One of the oldest solutions to this problem is to “tithe.” In this system, people give away a tenth of their income (or in some cases wealth). It is easy for many of us to calculate (taking 10% of a number is much easier than say 7% or 13%). It has been thousands of years since people developed the base-ten system and tithing is still practiced widely today, especially by Christians and Jews, but also by the adherents of many other religions as well.

At some level, 10% is arbitrary, but it is a great example of an important strategy: setting a clear measurable giving target. Having a specific, percentage-based goal is really helpful. Even if the specific target feels arbitrary, the process is intentional and allows you to recalibrate over time. With each iteration, you get more and more exact. I will use tithe to describe an approach to giving where someone sets a percentage-based giving target, even if it’s not necessarily a 10% target, and then strives to meet or exceed it.

In my family, we aim to give away at least a tenth of our annual household income. I have been using this approach since I was in my early 20s. Having a proactive plan with a specific target works for us and I recommend it to others for a few reasons:

What percentage target should I start with?

It’s hard to try to get the percentage exactly right–how would you even know if you did?

Fixating on identifying the perfect number could stall your momentum and keep you from starting at all. 0% is the wrong number so don’t let a thirst for precision lull you into inaction! The most important thing at this stage is setting an initial target and getting started. You can change it anytime. It’s just an initial try, so it’s low stakes. Start with an easy experiment.

Many years ago, when I started working at SEIU, I started bike commuting for the first time. I was the lucky recipient of a green Trek 720 hybrid from the early 1990s. I wanted to know the proper height for my seat so I asked an older, wiser, hipper colleague (I think he was 24). Dave Sachs was a hardcore bike enthusiast. He simply said, “every day, raise it a bit. Eventually, it’ll be too high. When that happens, lower it down a bit and it’ll be perfect.” I was disappointed since I was hoping for some algorithm that included inseam length, a Greek letter constant, and such.

In time, I found this was one of the wiser rules I ever learned. That concept has stuck with me ever since and it applies well to the question of giving. Every year, raise it up a bit. Should it ever get too high, drop it a bit. The most important thing isn’t getting the perfect number, it’s to start the process.

*Any* number will do.

If you are stuck and need a little more help, just give 1% more than the year before each year until it starts to feel like it’s too much.

Ari often thinks of this gradual ratcheting process as analogous to weight-lifting. The first time you go to the gym, it’s a terrible idea to try to bench press 400 lbs. That’s a recipe for disaster or at the very least a painful muscle strain. It’s better to start with something you know you can do and gradually build up your muscle and confidence over time. By starting low and increasing the target a little bit at a time, donors also can “build their giving muscle” over time.

As they gain experience, they get better at evaluating potential organizations to support and also learn more about what level of tithe is sustainable for them and their families (or if sustainability isn’t a goal, what rate of spending down is right). For more justice-ambitious givers, the metaphor also extends to the idea that if you’re not “feeling the burn” at least a little bit, it’s probably time to increase the level some more until you do.

Whichever metaphor you prefer, one helpful practice for increasing your giving over time without having to make painful cuts on your current spending is to consider committing to give ⅓ of any raise you get to charity (or non-charitable organizations or people doing good), save ⅓ for retirement or other goals, and spend the remaining ⅓. Behavioral economics research on budgeting shows it’s a lot easier to avoid lifestyle creep by keeping your spending where it is than it is to have to cut your existing spending.

Terrific, you have your percentage! But wait, what is it a percentage of? My target is 20% and I apply it to my adjusted gross income (AGI) from the previous year. This approach is easy to implement since most of us can access the information about how much we earned last year reasonably quickly via our federal tax returns (currently, AGI is on line 8b each year). I don’t exclude my tax payments because taxes, as FDR said, are the price we pay for living in an organized society. They help pay for many services I benefit from (libraries, schools, social security, firefighters, etc), so paying taxes is really separate from the spiritual/ethical/religious obligation to give intentionally, generously, and without compulsion.

Another advantage of using AGI is that it excludes income that I save in “traditional” retirement accounts like IRAs or 401(k)s. These funds won’t be readily available to me or taxed until I retire, and I want to be able to keep giving substantially in retirement as well, so it makes sense to tithe them in retirement, at the same time that distributions from these accounts will start showing up in my AGI and getting taxed. It will probably be quite a lot more in the future.

In my case, most of my financial resources are earned via working, so tithing based on income is an obvious solution. But many of the clients we work with have inherited significant amounts of money. Inheritance raises the question of whether to give away wealth in addition to income. For some people, the goal is to divest themselves of what they see as unearned, inherited privilege. For some, the goal is to address certain needs for their own family (such as the down payment on a house, ongoing support, education expenses, or perhaps beyond that) and then give away the rest. Some people want to give away all inherited wealth within a few years and some people want to give away income but maintain the principal for future generations and perhaps aim to see it grow significantly over time. Some people aren’t sure which of these is best and want to get started before they have a forever approach.

It’s a tough balance to know how much to give and how much to preserve. We have worked with clients and spoken with friends who are all good and thoughtful people and end up taking very different approaches. I wish I could share one perfect answer with everyone wrestling with these questions, but deciding which approach is the right one for each of us, is deeply personal and so the right answer is specific to each person’s situation. Coming to the right solution for you means engaging with complex emotions and hard moral questions. It also probably means planning for important tax and other technical considerations. We work with clients on this all the time–it’s one of the major focuses of our work at Values Added.

People choose different approaches to determine which donations to count toward their tithe and which don’t. Some people don’t count membership in a religious organization or NPR because they get some personal benefits from their membership, but others do count these memberships because they’re still voluntary donations that help support something good in the world. Some people only count things that directly help the poor and so would exclude their opera donations. Some people count donations to political campaigns while others don’t. 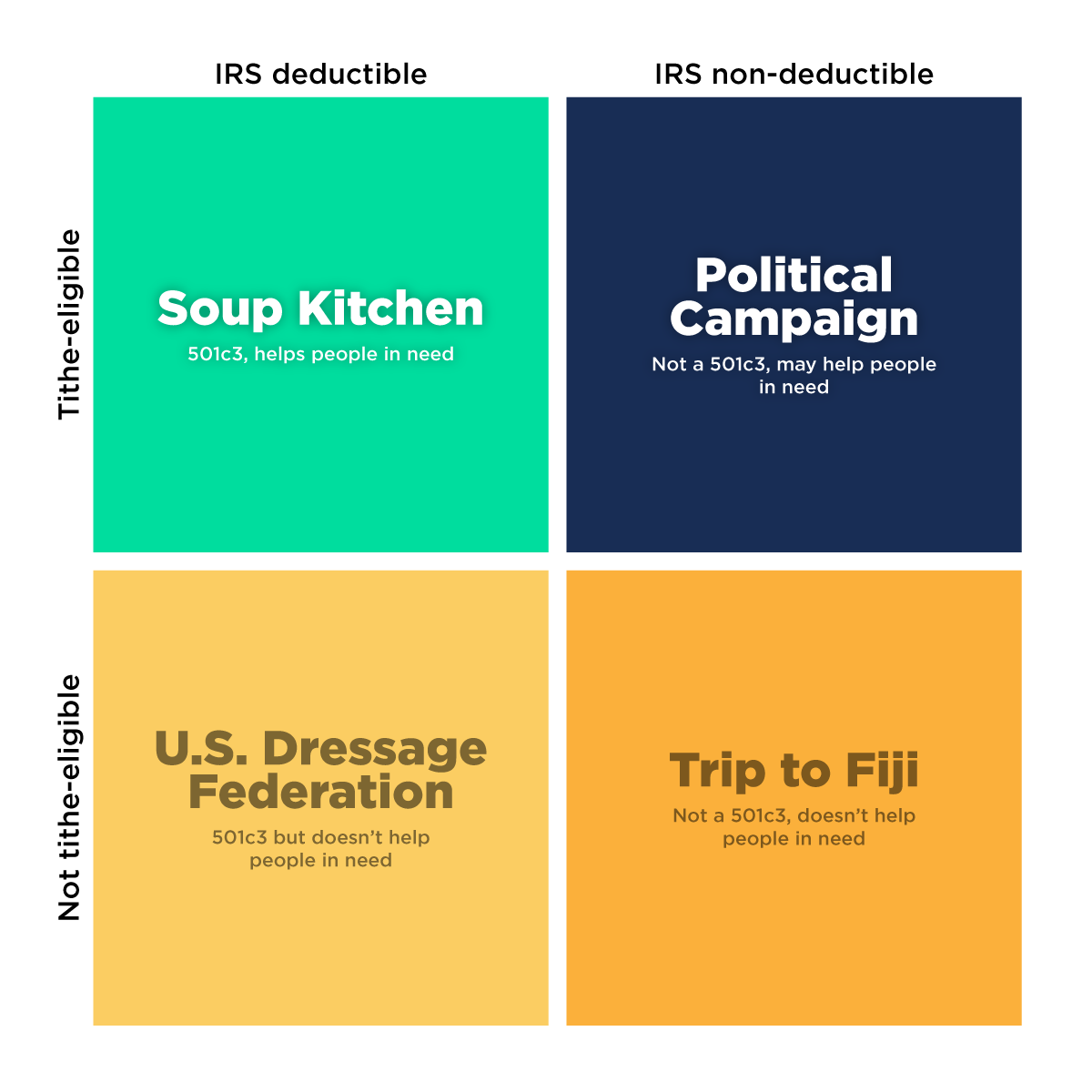 The IRS has a set of rules for what counts as “tax-deductible,” but those rules don’t perfectly map onto anyone’s definition of justice or helping people in need. Lots of 501c3 do great work and help people in need, but many are focused on other things. For example, I don’t particularly think that donations to the United States Dressage Federation, which helps coordinate horse dancing, helps to advance justice in the world. So IRS tax deductibility probably shouldn’t be your primary method for determining whether a thing should count toward your giving practice.

For me, to be eligible, the purpose should be to make a good-faith effort to make the world more just or more comfortable for those in need. The project can accomplish that through direct service, advocacy, politics, or any other plausible theory of change. Other uses of money may be good things to do too, but I wouldn’t count them myself. Your goals might be different. I, for instance, don’t really focus on giving to support arts and cultural organizations, but I think a person could believe that art is its own good and want to support cultural endeavors for their own sakes and to make them more accessible to people who can’t pay for tickets to a museum or theater. I have many friends who take this approach and I value it very much. Once you set your goals, think about whether specific organizations meet them or not and use that information to decide whether it counts. I tend to worry more about intent than about outcomes when deciding whether a use of money is eligible.

How should I keep track?

Now you have a tithing target and a sense of what to measure toward your tithe–that’s a lot of progress already! A target works much better if you keep track (specifically or generally) of whether you are meeting it. That’s pretty easy too, you just need to make a note when you give something that should count as charitable giving (or “investment in justice” or whatever phrase works for you). Do it in a way that is easy for you to keep up with (since a great system you don’t actually keep up with isn’t a great system!). Personally, I keep a spreadsheet all year to track distributions. Every time I make a contribution to a charity, political candidate, etc, I enter the total, date, cause, and any additional notes. I made a sample giving spreadsheet for informational purposes and you can check it out, make a copy of that one, use it to build your own, or just build your own without it. Some people also like to add a column for the gifts they plan to make each year and then check off a box when the gifts are actually made.

Now it’s your turn. Think about a percentage of your income that you’d like to allocate toward charity. Don’t obsess about the perfect number. Try one and see how it goes. Then start keeping track of how much you give—whether in a spreadsheet, a notebook, or some other way that makes sense for you.